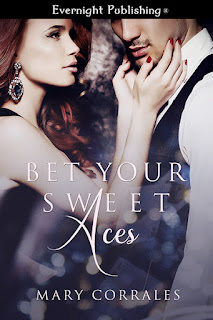 
Blurb: Eve Sorrel is owner of the Double Tumble Hotel and Casino. She's got a reputation as a temptress whose wicked mouth makes men long for a taste of her. Scandal erupts and she finds herself the object of scrutiny from investment lawyer, Brad Templeton.


Brad Templeton is determined to see Eve run out of business. With a background in investigation and law, he doesn't see her as a match until he meets her. Unable to resist her salacious allure, he finds himself shielding her from the Senator's wife who suspects Eve of being the Senator's mistress.


Eve's naughty ways may have just landed her the perfect man, if she can convince him to fight for her. What's a woman to do when her heart is on the line, except stack the deck in her favor!


Finding any excuse to nurture their lustful encounters, can Rob keep it professional as he tests Coreen? And will Coreen be able to hide her excitement for Rob from her superiors?
Embroiled in the life of a covert agent and trainee, both must keep their new sexual relationship a secret from those who work to uncover the truth.
When Coreen is offered an irresistible contract with the National Intelligence Agency, will she continue her relationship with Rob?
Buy Now on Audio book: https://www.amazon.com/Clandestine-Eyes/dp/B00KBZBK0I