Ivy B and Her Newest, Christmas Eve Surprise 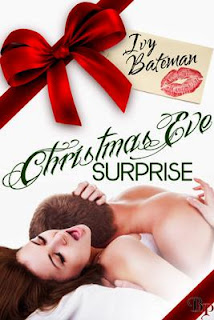 Hello Sweet Bees and thank-you for joining me here at Mary Corrales' blog! I hope you're all well and feeling somewhat relaxed even though it is only four days until Christmas!

But, I digress. I'm not here to talk you through holiday stress, no I'm here to shamelessly promote by latest book from Breathless Press Christmas Eve Surprise.

One of the main themes in this warm and funny Christmas tale about a sweet couple going through a bit of a dry spell is communication; or in Tim and Stella's, a case lack of it. Every couple, every friendship, every kind of relationship when you get right down to it works so, so, so much better if there is an open line of communication. It's not always easy and if you're like me, avoiding confrontation is an active hobby. However, when things need to be said to get a better understanding of the situation or just to keep people in the know so that they don’t feel like I'm forgetting about them I try not to keep things to myself and chat about it.
When it comes to your partner, not talking to them about something that is bothering you is usually not the best way to handle the situation. Specifically, if it's an issue that you feel involves both of you, keeping it inside and locked away in the drawer where you hide all your naughty secrets can lead to all kinds of problems. And even more specifically, if you feel there is something amiss with the romantic side of your relationship and you don't say anything, this can lead to feelings of rejection, anger and outright depression.
In Christmas Eve Surprise, Stella and Tim are having that kind of communication problem. They used to be pretty wild in and out of the bedroom, but over the course of a year they've gone from "hot fire" to "chilly embers".  Stella feels rejected and unattractive. Tim feels guilty and inadequate. Instead of chatting about it and coming to terms with the fact that it's really ok to not have as hot a sex life as they used to, both Tim and Stella come up with unorthodox plans that they will reveal to each other on Christmas Eve.
Both of them have the best of intentions.
But both of them are in for a big surprise.
Ivy Bateman: Excerpt from Christmas Eve Surprise
As the weeks crept closer and closer to Christmas Eve, Tim had had begun to worry that he wouldn't find a man that would have sex with him in front of Stella. He had fixated so much on this fantasy-fulfilling evening being his Christmas present to her that he'd not taken the time to find her another gift. Both he and Stella took finding each other the perfect gift very seriously. It wouldn't do if she was to present him with a gift she'd put a lot of thought into, like the beautiful chain she'd gotten him for his fob watch last year, only to be presented in return with a cardigan she didn't like or a hat she'd never wear.
He pulled out a key, unlocked his desk drawer, got out his black book, and pored over all of his carefully written notes. Tim looked at the dozens of entries he'd written about most of the single and attractive men in his office. None of them had seemed to be someone who would be willing to have a night of hot man sex in front of his wife. He felt doomed to give Stella a gift she would remember forever, but only because it was one he hadn't put any thought into. With a heavy heart he closed his black book and returned it to the drawer.
As he was locking it, his boss Terry walked in with an extremely good-looking man. The stranger filled his office with a god-like presence. He must be the new fellow.