Bacon on the Couch by Ivy Bateman

The other day as I was lying the couch in a fog of regret and wondering exactly how my friend and I managed to share a package of bacon when she was over for breakfast, I was also listening to a book called This is How by Augusten Burroughs. The book is straightforward and he talks about a lot of things I believe to be true, but have never been able to articulate. I could ramble on and on about all of the passages that resonated with me, but I'll just stick to one of his topics: confidence.
Now, I will be paraphrasing because I've only listened to it once, so if you know of the book and you feel I'm getting it terribly wrong, just bear with me. In essence what I'm going to talk about is my interpretation of his words as they filtered into my bacon filled brain.
Mr. Burroughs states that confidence is not more intelligence and it's not more knowledge. He says that confidence is focus. If you have to stand up in front of a room and give a speech or do a presentation, and you have focus on what you're doing and not about what the people in the room are thinking about you, you will be, or at least appear, confident. Because the reality is that even if you really know what you're talking about, if you start to worry or care about what the people in the room are thinking about you, you will lose your focus and you will not appear confident.
While still pondering why I'd consumed so much bacon, I was moved by what he was saying. I'd never thought about confidence that way before, and agreed that he was right. I'm quite a nervous person. I worry a lot and in groups of people I can be overcome with shyness and all I want to do is leave. I assume that people are thinking negatively about me and that to them all I must appear to be a big loser. However, when I'm on stage, when I'm in a play, I'm completely comfortable because I have focus. I stop thinking about what the people around me are thinking and my focus in 100% on why I'm up on that stage. After a production, I've had many people tell me how confident I am on stage. I've always brushed it off and said something like "Oh, I'm just being silly" because acting is just something I love to do. But when thinking about confidence as something that comes across when you have focus, then yes, I guess from time to time, I have a lot of confidence; which, as person who feels a lack of it often, is nice to know.
In my latest book from Breathless Press, Baby, You're Cold Inside, my lead character is a powerful, cold, and yes I must admit, a very mean person. She likes to get her way and she will do almost anything to get it, but, is Lily Sinclair confident?  When examining it from the definition Mr. Burroughs gives to the word confidence, I believe she is. One of Lily's character traits is that she really doesn't care what people think of her. Some of you, if you read my book, may believe that her iron exterior is just a mask for her insecurity and perhaps you're right. Much like the definition of confidence, characters can be interpreted in many different ways. For good or ill, Lily is who she is: sexy, strong and more than likely would never do what I did and eat half a pack of bacon for breakfast.
Blurb for Baby, You're Cold Inside, By Ivy Bateman 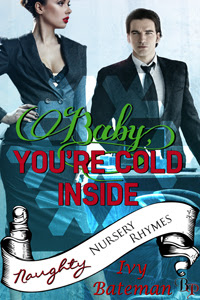 Lily Sinclair isn't in the Christmas spirit.
Successful, sexy and headstrong; being nice is too overrated when being naughty is so much more fun. However, there are those who believe that her cool interior stands in her way of true happiness. On the night when something a little bit colder than Lily takes her on a journey to her past, she goes along for the ride, but...
Will her guide show her just what it will take to melt her icy soul?

Excerpt from Baby, You're Cold Inside By Ivy Bateman
"Oh yes, my dear, just a little bit further...come on honey...just bend over a little further. Come on now—just a little bit lower, that's it." I bite my lip to keep from screaming. "That's right keep it up, keep it up...I'm so close, yes, baby keep it up—no, no, no! Not now!"

I lean over my desk and punch the intercom. "Phillip! Get your ass in here now!"

He doesn't respond to my holler. Maybe he has the volume turned down. He's done that before, the bad boy, trying to ignore me. What kind of assistant does that to his boss? One that doesn't last that long, that's who.

I punch the intercom button again, harder even though it won't make a difference, but I'm desperate and my buzz is quickly fading away.

"Phillip! Don't ignore me! I need to see you in my office now!"

Again, he isn't doing anything! Okay that's not true. He's still doing something. He is still filing and bending over, which is a marvel to behold, but his moves are being wasted! I open my desk drawer and pull out a squishy ball. I chuck it at the mirrored glass that stands approximately twenty feet from the front of my desk. Phillip jumps and screams like a girl. He glances at the mirrored glass looking slightly shamefaced. He can't see me, but he knows I can see him. Wow, he's a good looking guy...who isn't moving!

My morning good time feeling is being quickly defeated by the anger that is starting to build up in my system. I throw a second ball against the glass. Another girlish scream erupts from Phillip, but this time he springs into action. He hot foots it to my door and opens it at top speed. He's breathless and nervous which is perfect; it's the way I like my men.

"Yes, Ms. Sinclair? Is there something I can help you with?" He runs a hand through his shiny brown hair and steps into my office.

"No, Phillip, I just like to throw things at my wall to hear you squeal. Thank you for being so obliging." I am sarcastic to the point of it being farcical, but my lovely yet sometimes a little dim assistant doesn't pick up on it even a little.

"Oh, that's fine, Ms. Sinclair. I-I-I like to squeal for you." He blushes and looks at his large, polished shoes. "I'll go back to my desk and listen for another ball. Thank you for making me aware that you like my noises." He backs toward the door, his face now the shade of a ripe tomato. It's adorable, but I don't have time for adorable.

Book trailers on You Tube:

Baby, You're Cold Inside & The Fifth Story

All Romance Ebooks, Bookstrand, Barnes & Noble and more.
Posted by Mary Corrales at 12:00 AM

Email ThisBlogThis!Share to TwitterShare to FacebookShare to Pinterest
Labels: Baby You're Cold Inside, confidence, Ivy Bateman