Romance author, Ivy Bateman, tells us about The Art of Falling in Love

Welcome Ivy Bateman as she share a little about what it is to fall in love....


When you meet someone, someone you have a connection with, how do you know if the connection is lasting? In the past I've…ahem…connected with some men for a rather short time and others, for longer times. Unfortunately some of the ones that lasted longer than others I wish had been shorter but, c'est la vie.


Anyway, to get back to it, what makes a connection worth investigating? How do you know the one you think is the one really is the one? Obviously this is question that dances in the minds of many and can't be always be answered in a concrete manner or there would be no romance books, or poetry, or chick flicks. If we had the answer, if we knew "yes, this person is for me, but this one can take a long walk off a short pier", we would stop exploring romance and all they mystery that comes with it.


For me, the answer lies in how I felt when I wasn't with that person. If I thought about them a lot, if I ached to be in their presence I knew, it was a connection worth pursuing. If they tripped into my thought process from time to time, or if I felt better about myself when they weren't around, than I knew it was just a passing phase and moved on.


In my story The Art of Falling Forever, my lead heroine Amy has a connection with her boyfriend Troy, but she needs space due to an incident involving her mother. While trying to figure out how to direct the town's Christmas play, a torch passed onto her due to her mother's passing, she discovers that she has deep connection with her mother's dearest friend Eilam, a sweet, kind elderly man; or so he appears to the rest of the world as.


I don't want to give away the farm here, but through the course of the discovery, Amy needs to decide which connection is the one she needs to purse. She always thought it was Troy, but Eilam presents her with a life she never imagined was possible. Her attachment for both men is strong, but which one is best for her? Which one would last forever?


In real life, with my own forever connection, I chose the man who made me feel whole. My husband loves me for who I am, for the good and the bad, and everything in between. I can be myself with him as I can be with no other person. My heart beats with his. His is my truest connection. He is my forever.


Thank-you very much to Mary for having me on her blog today. Please stop by my blog and enter my contest for a chance to win The Art of Falling Forever, a couple other stories, and a $5 Breathless Press gift card. The contest goes until December, 20th and I'll announce the winner on December, 21st.


Happy Holidays everyone and Happy Reading!


Ivy Bateman
xoxo
Thanks Ivy for coming by and sharing. It's easy to believe in true love when I hear what you've found in your husband. May we all have the chance to find that one special love for ourselves.
Readers, please continue on for a peek at Ivy's awesome new book. 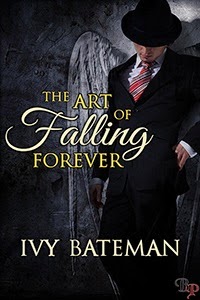 Ivy Bateman Blurb for The Art of Falling Forever:


A chaste kiss on the cheek leads to the discovery of a lifetime.


Even though Eilam has always been part of her world, Amy never thought of him as more than a mother's friend. One night, after rehearsal for the town's Christmas Pageant, Eilam reveals that not only is there more to him than Amy had ever imagined, but that together they could be the next chapter in a story that has played out in her family for over 2000 years.


While struggling to cope with the death of her mother and the responsibility of being in charge of the biggest even of the year, Amy must decide whether her future lies with her estranged boyfriend Troy or the enigmatic Eilam.


Excerpt For The Art of Falling Forever By Ivy Bateman
The doorbell chimed, causing Amy to nearly jump out of her skin. She glanced at the clock. It was almost five, which meant that it could only be Eilam and he was now the last person she wanted to see. Tracy demanding she explain her new attitude, Troy begging her to take him back—either scenario would have been preferable to what waited for her on the other side of her front door.
The bell chimed again, followed by insistent knocking. "Amara, I know you're in there. If you don't open the door I will be forced to break it down which, as I'm sure you've figured out, would blow my cover."
Amy smiled a little. He somehow knew that she'd discovered the truth. She remembered his voice on the phone, his suspicious tone. He must have guessed or known she would soon be on a path of discovery. But how? She touched her cheek. Of course, the kiss.
"Please let me in. There's so much you need to know."
Amy pushed herself to standing, taking the box of secrets with her. She placed it on the table in the living room and then went to the front door. She opened it, slowly and cautiously, blocking Eilam's immediate entry with her body.
"Amara, please don't be afraid."
"Why not? You give me so much to be afraid of, being a shapeshifter, or whatever it is you are, who haunts the women in my family. I think you should go."
"No, I'm not going to go. Not until you've given me a chance to explain myself. I don't mean to be firm with you, but please let me in."
Amy looked at his beaten fedora, his crinkled coat, his bright blue eyes, and his wispy white eyebrows. There was nothing malicious in his demeanor and yet he was changed. He seemed older in a 'seen a lot of time' kind of way, and stronger too. She couldn't help feeling he was now a stranger, but Amy had to trust her mother would not let her be in the presence of a madman.


Ivy's books are available from the Breathless Press Website:
Ivy Bateman on Breathless Press
Ivy's Blog: http://ivybmisbehavin.blogspot.com/
Or follow Ivy on Twitter: https://twitter.com/IvyBateman
Or drop Ivy a line at: ivybmisbehavin@gmail.com
Posted by Mary Corrales at 2:00 AM No comments:

What Do You Love about the Holiday Season?


I love the Christmas holiday season. There are sparkly lights everywhere, and it’s the one time of the year where decorating with glitter is never overdone.


Last night, I saw the Trans-Siberian Orchestra in concert and it was an amazing experience. I try to go every year, if possible, because it’s uplifting, exciting, and reminds me that Christmas is about the simple joys in life. Okay and I admit, the men are sexy and have major swagger. ;-)


No matter whether there is dozens of presents under the tree or none at all, it’s those we love who bring the true meaning of Christmas to light. What do we remember about the holidays, anyway? Think about it and you’ll realize it’s being together with family and friends, sharing stories, good food and drinks, that make the season memorable.


A few of my favorite holiday movies are, Scrooge with George C. Scott, It’s A Wonderful Life, and Nestor the Long-Eared Christmas Donkey. The last mentioned is a cartoon that always manages to make me tear-up.


So, now you know my favorite music and movies for the season. What do you love about the holiday season? What makes this time of year special to you?


As you go out shopping for gifts, please remember to be kind to each other. Hold open a door, smile at a cashier, and be patient with your fellow shoppers. It’s the little kindnesses that can impact others in a big way.


Christmas Blessings to all,